Thanks, Guelph Mercury, for the opportunity 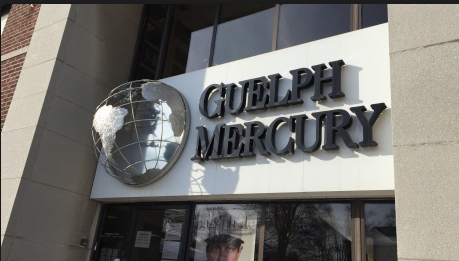 Learning Monday that the Guelph Mercury daily newspaper is closing its doors this Friday, after 149 years, was shocking.

To me, it feels like people in Guelph and surrounding area are losing a community leader, one that we turn to for news, opinion and guidance not just occasionally, but everyday. And I’m not sure how you replace that kind of loss.

I’ve written a weekly column called Urban Cowboy about agriculture and food for the Mercury since early 1991. I’ve posted a column here from August of that year. I like this one in particular, because the topic is feisty, the news maker is Terry Daynard (who today continues to make headlines as a level-headed spokesperson for agriculture), and my long-time colleague Vik Kirsch is listed at the top of the page as the regional editor.

I also like it because the photo suggests I once had dark hair, some 1,300 columns ago. :-) One of my early Urban Cowboy columns, from August 1991.

My column was launched quite casually, when I received a call from then-assistant editor Bonnie Ewen Pyke. I knew her through my work at the University of Guelph in research communications; she knew I was a journalist.

And those were pretty well the last instructions I received (except to come up with a name…so I chose Urban Cowboy, a guy from the city writing about the country). It turned out to be a wonderful partnership. The Mercury gave me free rein, never suggesting what I should and shouldn’t write about, and never fiddling with my content — other than to urge me to strive for acronym-free copy, which is a real challenge in agriculture.

The newspaper sincerely wanted to give ink to the agriculture and food sector, which it realized was vital to the lifeblood of Guelph. I can’t think of another Canadian daily that made such a consistent effort to bring agriculture to the fore, not just through my column, but by making a point to almost always assign reporters to the many agriculture-related news conferences and announcements that took place in Guelph, and continue to do so. It’s often published bylined stories from my students as well, mostly about agricultural research, once again making an effort to support the community in imaginative ways that I haven’t seen anywhere else.

I’m grateful to have had the opportunity to be part of the Guelph Mercury, to have introduced to readers University of Guelph agri-food research as well as issues affecting the sector in this way, and to have worked with tremendous news sources and supportive editors. I learned valuable lessons and kept current with the profession by connecting with dedicated reporters and editors such as Vik, Bonnie, Ed Cassavoy and Phil Andrews. I’ve tried passing those lessons on, to my SPARK and agricultural communications students at the University of Guelph, so they too could benefit from such professionals.

Journalism is all about relationships, and it’s been great to have had this 25-year relationship with Guelph Mercury readers as the Urban Cowboy. I hope the fine journalists affected by the closure are able to land meaningful jobs in this highly evolving profession.

Thinking local about beer and wine