Taking lamb to the street during barbecue season

Canadian sheep producers are taking lamb to the street. They believe lamb is seen as too much of a fancy food that you order in restaurants, but seldom cook at home. Statistics bear them out, and so they're rethinking the way they're positioning lamb in the market, to make it more approachable, appealing and available.

The new direction was announced last week when the Guelph-based Canadian Sheep Federation announced the industry was taking a fresh approach to enhanced production capacity, producer capabilities and marketing, as a result of what it called a rigorous business planning exercise.

With support from Agriculture and Agri-Food Canada, the federation spent appreciable time poring over market reports and statistics, and emerged convinced opportunities abound for expanding the market share and value of Canadian lamb. After all, lamb consumption is slowly but steadily increasing on both a per capita and overall basis. And consumers say they're open to trying new red meats and meat products.

But beyond that, consumers are confused about lamb.

For example, consumer research conducted on behalf of the federation showed lamb is not considered by the vast majority of consumers — including those who regularly eat lamb — to be an everyday, or even every month, red meat. Outside of select devotees, most lamb consumers only eat the product five or six times per year, and often only on special occasions.

That will not break new ground.

Nor will reluctance to cook it, which is a big reason the industry is taking lamb to the streets. Many consumers — again, including those who regularly consume lamb — feel ill-equipped to prepare it successfully at home. They need to be more comfortable with the product and realize, especially with summer upon us, lamb too belongs on the barbecue.

But despite the unfamiliarity with lamb, consumers — those 35 years old and up, who are lamb's main patrons — hold it in esteem. Like Canadian beef and pork, lamb from this country is perceived to be better than imports that have travelled halfway around the world to get here. In fact, a recent study showed Canadian lamb was leaner than popular imports, so there's some foundation for that perception.

However, even though demand is two times greater than the supply, the federation is focused more on increasing the industry's ability to better meet the current demand, than increasing consumer demand beyond its existing bounds. It's a delicate balance between delivering more of what consumers want, versus creating more demand, when the supply is inadequate for even the current market. There's no sense biting off more than you can chew, says the federation.

Part of the problem for the sheep industry is that unlike some other livestock farmers, many lamb producers have a relatively smaller number of animals. That means it's more challenging to make a strong business case for investing in change, when the potential for a return is much less spectacular than it is for livestock farmers with large operations. Developing strategies that demonstrate benefits to those smaller producers is a priority for the industry.

In fact, right now the sheep federation has as much internal development to do with producers, as it does external marketing. It has to ask some hard questions, such as do sheep producers really have the capacity, capability and commitment to grow the market in an integrated, methodic way?

This has been a recurring theme in the sheep industry. It has a great product, yet it's been a challenge to motivate producers to jell and rally around a new approach to producing and selling lamb that would put more Canadian product on consumers' tables.

And I think it's going to become a problem that increasingly faces other agricultural commodities. As many middle-sized farmers disappear, which is what the latest Statistics Canada farm census reveals, some of their production will be taken up by small farmers who raise animals as a sideline, and are looking to fill niches and pastures, rather than expand their production and develop a strategic marketing plan.

Dabbling is not what the industry needs to prosper. But unless big farmers integrate sheep into their production, where will the increased flock come from?

It's a frustrating question for the sheep federation to ponder, given the demand is there. But it's an intelligent one, because creating demand without supply would be a self-defeating strategy. So federation officials will spend the next while working inside the system, getting farmers to rally around their new look and strategy, and trying to get them excited about making lamb more accessible. For the federation, it will be a busy summer.

Owen Roberts teaches agricultural communications at the University of Guelph. 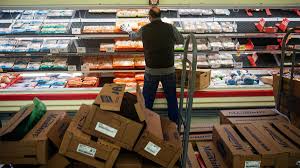 Frontline food workers to ontario: we’re here for you

Farmers fed and watered for election ’07

Owen Roberts is a faculty member in the Agricultural Leadership, Education and Communications program at the University of Illinois. As an agricultural journalist, he is the past president of the International Federation of Agricultural Journalists and a lifetime achievement award recipient from the Canadian Farm Writers' Federation.